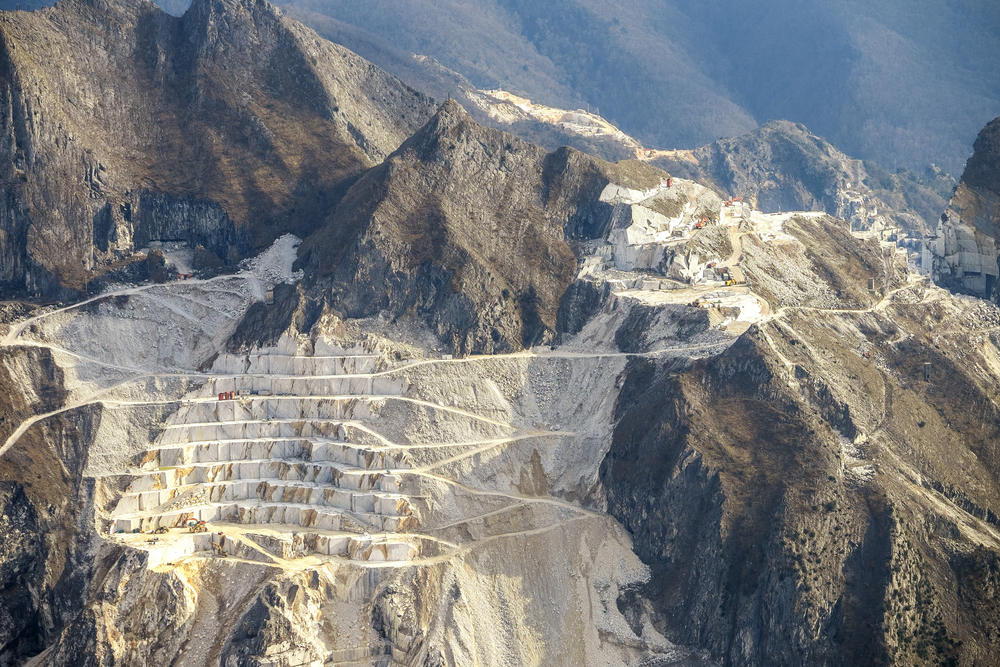 Carrara marble is the most famous marble in the world. It is about 30 million years old when the continental plates moved on top of each other, creating the Apuan Alps. There are around 50 varieties - the best known are probably Carrara bianco and ordinario. It was most likely used earlier than assumed - in the excavations at Luni marble parts were found in tombs from the 4th century BC. The next very well-known traces are from the Roman period - but probably the most important and best-known marketing agent for Carrara marble was Michelangelo, who not only looked for the best stone here, but also ordered and paid for it. The piece of rock then became David, who after the assassination attempt in the Galleria dell´ Accademia in Florence - also to protect him from environmental influences, with his copy on the piazza della Signoria. Today millions of tons are mined annually in Carrara, an entire industry has emerged.

A very nice appreciation has only recently been thought up - a "White Marble Marathon" - confirmed last year for the first time, for this and next year. The nice thing about it - everyone can participate. So that it is not too difficult for anyone, three stages have been chosen - the White Marble Marathon is 42.195 km long and covers the entire route from Marina di Carrara via Massa and Marina di Massa to the starting point.

The 21 km long “Half Marathon” always has the same starting point in Marina di Carrara, but instead of going back, it ends in Marina di Massa.

For those who do not want (or cannot), there is the white 10km marble marathon, which you can take it easy and still bring a symbolic medal home.

The White Marble Marathon took place on February 11 this year (2018) and has mutated into a real race, just like its organization. The route was completely closed.

Shuttle buses between Marina di Massa and Marina di Carrara are available for all participants.

The trail has restrooms and showers, water tanks topped up by local sponsor Fonteviva, refreshments at the end of the trail and, of course, medical help along the slopes.

In short, the White Marble Marathon between Marina di Carrara and Massa, as well as the competition, is also a way to spend a morning of physical activity while having fun and visiting the beautiful territory.