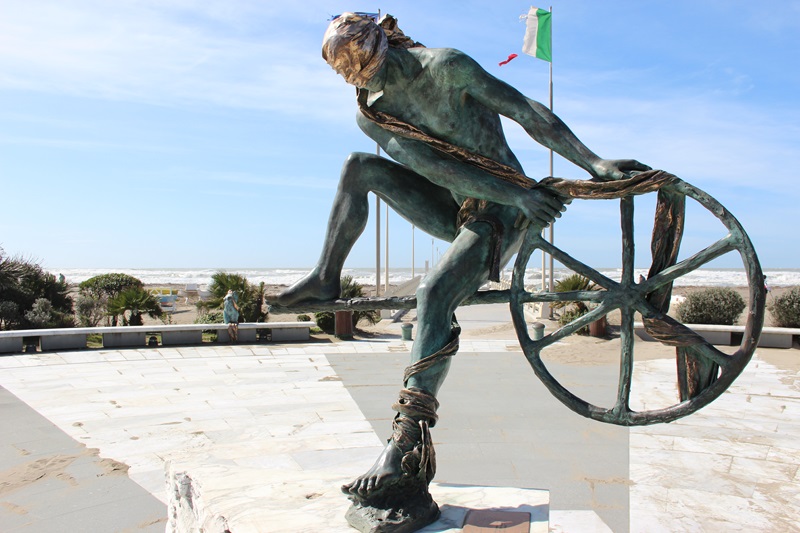 Forte dei Marmi is a renowned resort and it is one of the symbols of Tuscany. Its territory extends for 9 sq. Km and it is close to Pietrasanta. In particular, Forte dei Marmi is linked to the world-famous tourism that from the nineteenth century contributed strongly to its development as a resort of fun.

The city began to populate thanks to the marble trade in the 16th century, when Pope Leo X commissioned Michelangelo to build a road to transport marble from the Apuan mountains to the sea. In 1788 was built the Fort (Fortino), from which the city was named. The “Fortino" is the City symbol and it was built by Leopold I to protect the area and promote its urban settlement. In the beginning the Fortino was also used as a rematch of the precious marbles from the Apuane and waiting for boarding. Today it is the most important monument of Forte dei Marmi, located in the center of the city and home of the Museum of Satire and Caricature, the only institution of its kind. The museum represents a worldwide collection and a study center on satire and caricature. The collection includes original drawings, a video library and a media library.

Another attraction of the city, near the beach, is also the Pontile, used in the past for the loading and unloading of marble blocks: built in reinforced concrete and 275 meters long, today offers an unusual glimpse of the mainland, with a panorama embracing the coast from Massa to Viareggio.

Also interesting is the town hall of Forte dei Marmi, in Piazza Dante: a structure of the fascist era, characterized by a typical "M" shape, in honor of Mussolini; in front there is a beautiful Italian garden in Remembranza park. Instead, it dates back to the twentieth century  the church dedicated to San Francesco overlooking the main square.

Around the city there are also several statues and monuments, like some sculptures by Arturo Dazzi. In Via Matteo Civitali we find the Ugo Guidi Art Museum, with about 600 sculptures, drawings and temperas.

But Forte dei Marmi is also famous for its luxury shopping: among Piazza Garibaldi, Via Roma, Via Mazzini and Piazza Dante, there is a wide choice of shops that offer the best Italian and foreign brands, from clothing to jewelery, from accessories to footwear. This is also associated with a vibrant and worldly nightlife, with the most famous and renowned Italian nightclub, the Capannina, inaugurated in 1929 and still in business.

Worth a visit also the "Roma Imperiale" district with its ancient noble villas, including Villa Agnelli, Villa Antonietta and Casa Mann Borghese. In Vittoria Apuana there is Villa Bertelli, one of the most popular attractions in Forte dei Marmi. Built at the end of the nineteenth century as the site of a company that produced explosive mines for war use, it was converted into a hotel in the late 1920s, then closed in 1971. After decades of abandonment, the building was acquired by the municipality of Forte dei Marmi which, having restored it, has opened it to the public.

Massarosa is located in the northern part of Versilia, near Massaciuccoli Lake. It was an Etruscan and Roman settlement and since the 14th century it passed under the control of Lucca, till the Unification of Italy.

The area is characterized by many charming villas dating back to the 16th and 19th centuries. The most famous is Villa Baldini, a neoclassical building, a forced residence of Paolina Bonaparte in the hundred days of imprisonment he had to suffer in 1815.

In the surroundings, in Elici we find the Romanesque church of San Pantaleone, along the ancient route of Via Francigena and Montramito, home to a ruined castle. Lake Massaciuccoli then, is part of the Migliarino Natural Park, where there are suggestive walks among cane thickets.

The villages around the town of Massarosa are characterized by medieval buildings and ancient churches and villas. In the northern part of the territory you will find Corsanico, a village with a beautiful views of the Tyrrhenian Sea and the church of San Michele; Mommio, a characteristic medieval village and Bargecchia, with the church of San Martino of Romanesque origin. All this area is covered with centennial olive trees that are the true symbol of Massarosa.

Pietrasanta extends between the Apuan Alps and the sea. It was built in the 13th century and the passage of the Via Francigena contributed to the development of the town, where there are numerous religious buildings, first of all the San Martino Cathedral of the 14th century, full of Romanesque marbles and frescoes, overlooking the main square, together with the Baptistery of Saint Giacinto, the Sant'Agostino complex, the monastery of S. Leone, the churches of S. Biagio, S. Nicola di Sala, S. Francesco and finally Palazzo Moroni, home of the Archaeological Museum.

Pietrasanta is dominated by the Rocca di Sala, which rises on the historic center. In recent times, the town has become famous for the Botero sculptures that make a beautiful show on its streets.

On the hills, we find the churches of Valdicastello and Vallecchia, two jewels of Christianity. Already in Valdicastello, the poet Carducci was born and his home is a museum today, while Capezzano Monte and Capriglia are other characteristic villages.

Finally Marina di Pietrasanta is in the center of Versilia with its sandy beaches and the offer of nighttime entertainment.

In Marina di Pietrasanta there is a beautiful pine forest known as Versiliana. Villa Versiliana is a residence dating back to the end of the eighteenth century and was born as a stately estate of the Marquis Ginori Lisci, who built the great central villa. Today, the grounds around the residence are a public park where cultural initiatives are organized throughout the year. The pine forest surrounding La Versiliana is also known for hosting the 19th century poet and writer Gabriele D'Annunzio. Art and culture dominate both the interior and exterior of the complex. In the park there are many appointments of the Caffè della Versiliana. Children can also have rich and creative experiences thanks to the activities of the "Versiliana dei Piccoli", which organizes artistic workshops and educational paths for children. The fulcrum of the park is the theater that every summer animates with the Festival of Versiliana. The event features a rich calendar of evening events related to dance, music and theater.

Seravezza is located in mountainous territory at the foot of the Apuan Alps. The medieval village was born for marble mining and marble work, and the marble still characterizes the village with the caves of Mount Altissimo and the cathedral of St. Lorenzo and Barbara of the 16th century. The Medicean palace, a fortress to control the marble quarries, was wanted by Cosimo I. Today it is home to the Museum of Work and Traditions of Historic Versilia.

There are numerous villages around Seravezza, including Azzano, with its ancient Chapel, along the old road leading to Stazzema and Garfagnana, Corvaia, Basati, Riomagno, Querceta and Ripa.

Stazzema is the highest town in Versilia, at the foot of the Apuan Alps. Just outside the center is the church of Santa Maria Assunta, an ancient parish of the ninth century. In the village you will find the Clock Tower made in 1739 and the Carraia Fountain of the 16th century. The sanctuary of the Madonna del Piastraio rises in a forest and is an interesting building of the seventeenth century. To the north lies the church of Maria Santissima delle Nevi.

Many are the hamlets, especially frequented by the many hiking trails that go up to the Apuane Alpes: Pruno, Cardoso, Terrinca, Levigliani and others. Visit Sant'Anna di Stazzema with the ossuary museum, place of fierce Nazi-Fascist killer.

Torre del Lago Puccini is located not far from Viareggio. An ancient tower, nowadays disappeared, named the town, which is famous for the composer Giacomo Puccini, who established here his residence for a long time, in what is today the villa “Giacomo Puccini”. In the villa, nowadays transformed into a museum, the master stayed for almost thirty years. The great musician's documents and memorabilia have been preserved to this day. The main attraction of the town are the fine sand beaches and the sea. Also nearby is Lake Massaciuccoli, where you can make interesting excursions. In the summer, Torre del Lago is enriched with shows and exhibitions in the Puccini Festival.

The city of Viareggio is a seaside and fishing town of Versilia, and it extends over three kilometers along the coast. Viareggio is considered the most famous touristic place in Versilia. Of recent origin, it developed only after the nineteenth century becoming an important shopping and touristic center.

Rich families built in the 18th and 19th centuries large villas, mostly in Liberty style, on the main promenade of the seafront, such as Villa Puccini, Villa Argentina, Villa Crastan Arrighi, Villa Paolina. The most important monuments in Viareggio are grouped on the seafront that from the early 1900s gave rise to the liberty style in Viareggio. Also to see: Palazzo Bernardini; Palazzo Belluomini; Palazzo Paolina; Palace of the Citadel, which later became the hotel Vittoria. On the waterfront there are also historic hotels such as the Prince of Piedmont and the bathing establishments.

But Viareggio is famous especially for its Carnival which, since 1873, is repeated every year according to tradition, with allegorical paperboard carriages, which are real works of art.

The Civic Museums of Villa Paolina were born in 1822 and presently host exhibitions of various kinds throughout the year.

Finally we have Villa Borbone, located in the center of a large estate, halfway between Viareggio and Torre del Lago. In the mausoleum chapel of the Palace are buried the sovereigns of Lucca and their descendants.